Global Infrastructure Partners became an early mover when it paid €208 million ($234 million) for a 24.4% stake in Saeta Yield SA, a Spanish wind-farm operator that went public in February. Dealogic, a firm that tracks deals, has counted eight smaller transactions involving Spanish solar and wind energy companies during the first five months of the year, two more than during all of 2014.

In addition, at least seven midsize wind-energy companies in Spain and Portugal are considering or negotiating a sale after being approached by investors in recent months, according to Madrid bankers and executives at several firms. 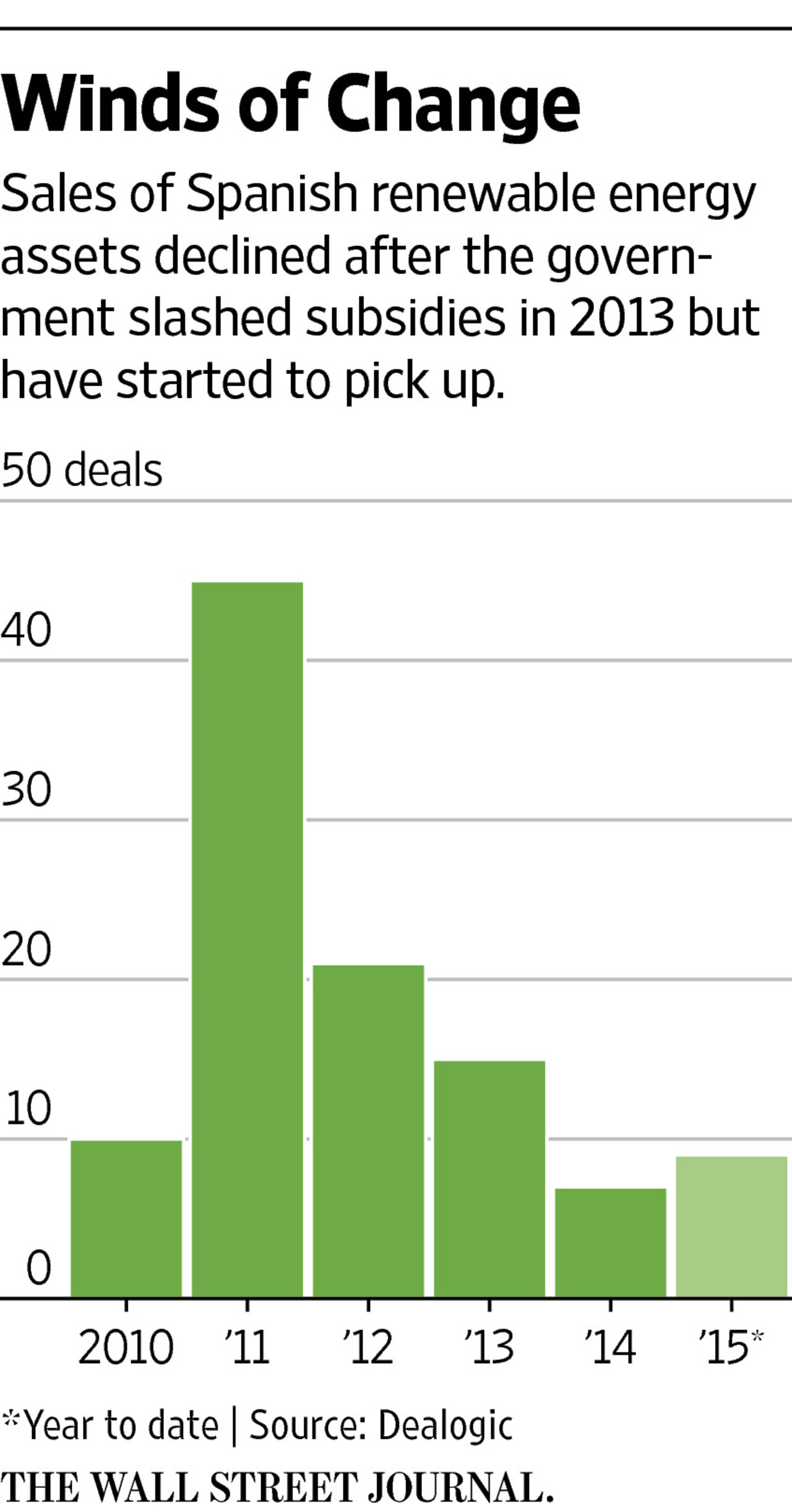 If concluded, the deals would serve to revive an industry that was thrown into disarray two years ago when a recession prompted the Spanish government to slash subsidies for wind and solar energy plants. Now an economic recovery and expectations that the government won’t make further subsidy cuts are attracting investors.

What attracts such investors are the steady yields that renewable energy firms usually generate. Low interest rates globally are forcing managers to seek returns from assets other than stocks and bonds.

And while renewable energy returns are much lower now than they were before the subsidy cuts, Spain still guarantees a 7.5% annual return for electricity sold by most wind farms.

“My impression is the whole sector is up for sale,” said Cristóbal Rodriguez, chief executive at Eolia Renovables SA, which has 580 megawatts of renewable energy capacity in Spain. Eolia recently hired Bank of America Merrill Lynch to advise it on a potential sale.

France’s EDF Energies Nouvelles SA has begun exploring a sale of roughly half its unit in Portugal, and is working with Société Générale, people with knowledge of the process said. The French company’s Portuguese unit has a total capacity of 507 megawatts of energy. EDF Energies Nouvelles declined to comment.

Other Spanish companies that have hired advisers for potential sales include Bora Wind Energy Management SA, owned by private-equity firm Bridgepoint Capital Ltd.; Gecal Renovables SA, which has most of its wind farms in northern Spain, and the renewable-energy unit of industrial group Corporación Gestamp, which operates wind farms in Spain and nine other countries.

In Portugal, Spanish private-equity firm Magnum is working with J.P. Morgan on an auction of Iberwind SA, which has close to 700 megawatts of installed capacity, people familiar with the process said. Italian ENEL Green Power SA said recently it is studying a sale of its Portuguese wind farms.

Bankers said other firms in the industry were contemplating sales due to a surge in interest from pension funds and infrastructure investors.

Industry executives and bankers say potential buyers include asset managers such as Canada Pension Plan and APG and PGGM of the Netherlands, and private-equity firms such as Blackstone Group LP and Centerbridge Capital Partners.

In the six years before the subsidy cuts, Spain doubled its capacity for wind-generated electricity, to 23,000 megawatts. Its wind turbines can produce more than those of any other country except China, the U.S. and Germany, according to 2014 data from the Global Wind Energy Council at the end of last year.

Spanish households are unable to choose the source of electricity they take from the grid, but they can favor renewables by instructing the power company to direct their utility payments to renewable energy producers. The Spanish Wind Energy Association launched the “hipster” campaign to boost demand. It says wind turbines supply a fifth of the country’s electricity.

New investment, however, is unlikely to spur an expansion of wind farms, Eolia’s Mr. Rodríguez said. Buyers are more likely to cut costs by merging existing wind-farm operators, he said.

For Eolia’s shareholders, the industry revival may end a long wait to sell. The company was founded in 2007 by combining 180 owners of smaller wind farm operations. Plans to list on Spain’s stock exchange fell through however when the global financial crisis hit in 2008.

“My shareholders have been there for more than a decade,” said Mr. Rodriguez. “It’s only natural that some want out.”